Landlords have little to no rights in Ontario. If you have ever been a landlord, and your tenant wouldn't pay or leave, then you know the pain im talking about. Now Airbnb guest on the other hand are not really your tenant. So if they do something to break your rules, guess what, there is no tenant landlord board to deal with. Your hands are not tied. You will not be treated unfair. 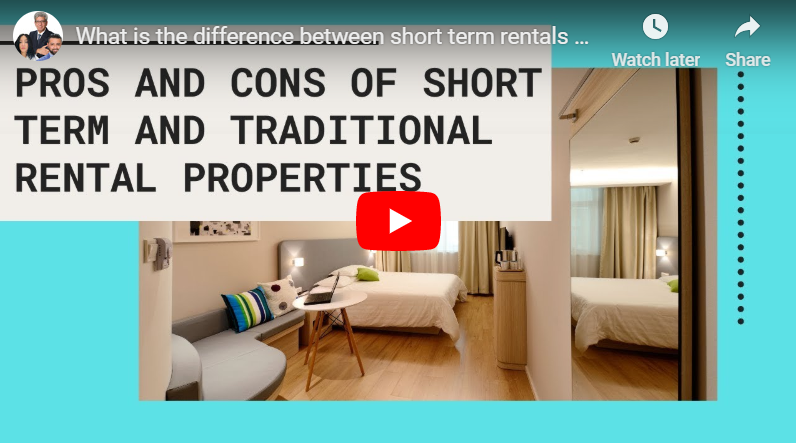 What's the difference between traditional long-term rental versus short term Airbnb rent? I think there's a lot of misconceptions, myths, fears, just misunderstood ideas about Airbnb. What are some of them?

That was the way I thought I owed originally before I got introduced to Airbnb and I started using it. I used to think there's going to be, you know, people come in and crash your house or, you know, just break the TV and break the walls and paint on the doors. But I, you know, it's, it's, that's far from the truth. I think a little bit goes back to having a little bit of faith in humanity, number one.

Number two we have to understand that the people who are booking on Airbnb is the same as hosts because they're, they build a profile and they also get reviews. As a guest, you get reviews by hosts. So if you're a traveler or you're planning to do more traveling in the future, the last thing you want to do is create a bad reputation or bad or bad reviews for yourself on Airbnb because then in the future, nobody else is going to rent to you. And then you're stuck with having to pay the hotel fees. Basically, just to compare it like tradition of the long term, your one-year lease as a landlord, you would require the tenant to provide you with a credit check, credit history with the credit score. Now as the, as that or the host in Airbnb, what you would require the guest to have you know, reviews from other hosts. If you see the reviews and other people are saying this person was dirty or this person was really loud or they crushed the house, then guess what? You have the option not to give your place to the yes, just like you would have the option not to rent your property to that tenant if their credit history wasn't good or if they didn't. We're not making payments regularly. Additionally, Airbnb does a really good job at making sure that a hosts and homeowners are protected by, by asking all travelers to provide a government issued ID.

Typically, you would have your pass for like some of the places that I've gone to have required my passport number, so I put it into the Airbnb website. I don't necessarily give it to the, to the post, I put it on Airbnb and so I know that it's safe. And, and so this way they already kind of do their screening on people. And Airbnb also has people monitoring this 24 hours a day, seven days a week. It's based sense, something is a little bit fishy. They immediately cancel the reservation and like, you know, like we had one of our reservations, it was our first one and we were really excited cause we had just gotten somebody to book. But Airbnb immediately, yeah, they canceled it because they recognize some, I guess they know what to look for. They noticed some red flags, so they immediately canceled it and let us know. We appreciate that there is protection on Airbnb and you're not going to where basically like when the way you would take the payments is like that the one year lease they would give you first and last and then they would pay you of cost data checks for about the additional 10 months. Hopefully that's what you're doing. If you're renting, know, making sure you know, you get the posted a checks. But a, in Airbnb, the way it works is you just connect your bank account or PayPal account and when the guest arrive basically the money is taken out of their account and Airbnb your, so you're dealing with Airbnb. You never have any problems collecting your money.

You're never dealing like money is never traded between hosts and guests. Everything goes through the Airbnb system. The host is paid through Airbnb, the guest pays Airbnb. Everything is going through their system. And the best part is that as a host you're like you charged a cleaning fee. The guest basically pay for the cleaning fee. You're able to have every time a guest [inaudible] they just pay for the cleaning fee and it doesn't cost you any additional money, but you're able to always keep the house clean. Also, one other thing to remember is if you're worried about damages and things like that you, you can collect a deposit from every guest, right? In this number, it can be whatever number you think is fair. We don't recommend a really high number that's unreasonable, but you can go, you can collect deposit. Also if at any time the property is damaged by a Airbnb, we'll go back and get the money from them. But there they are. Like, we're insured hosts are insured. For any damages, Airbnb will collect that money for you.

What else is like the basically the difference. Well some of the differences, you know, again, not to discourage anyway, if you're having regular tenants, you can do that if you want, if you don't want to go through the Airbnb route. But one of the things that I like about renting my place on Airbnb is the wear and tear. Typically, you don't have, you know, Airbnb guests when they stay at a place, they really just need a place to stay. They're using the shower. They're using some towels that you leave for them. They're kind of just using the bed and the coffee, maybe the coffee maker whatever. Just really basic things, the kettle, but they're not really doing heavy cooking and doing like loads and loads of laundry like nobody really does at Airbnb unless you're staying for a longer period of time. And even then, you're still not really using it that much when I stay at Airbnb's or you stay, I don't know. I mean, I, I just, I just go out to eat. Typically, the wear and tear on a house is a lot less.