Have you ever noticed no matter how much you work and save, you're still spinning in circles and living paycheck to paycheck? That's because you don't have any cash flow flowing in. Any I get it, its hard to do that when the prices of homes are much higher than what rent would cover. But we have found the formula. SHORT TERM RENTALS... 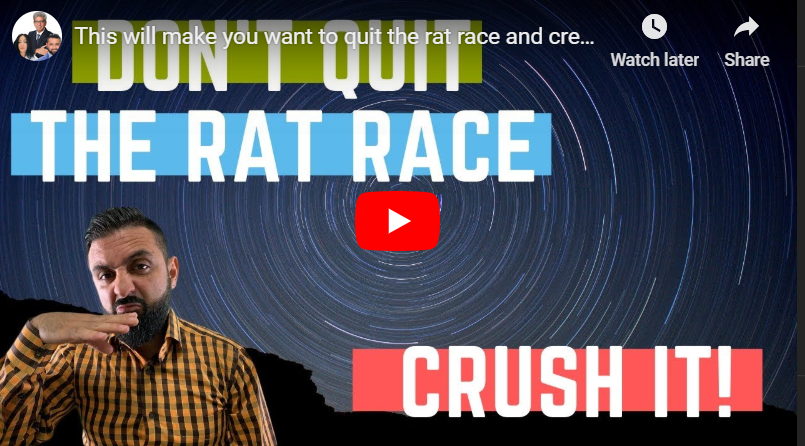 We have a cool topic with you about how to create your own economy and get out of the rat race. So many of us are, you know, hustling and struggling and the rat race. And many people actually, there's been studies on that. Many people are are just unhappy and tired and the only reason they're doing what they're doing is just to pay the bills and feed their family. It doesn't have to be that way. You can create a lucrative, scalable, profitable business and we have the solution for you. You can create literally start creating cashflow if you're not, if you're already doing this, that's good for you.

If you're doing this using traditional rental income you know, that's good for you because you're way ahead of everybody else, but you can 10 X that income just by switching to short term Airbnb rental. If not doing that, then you should be doing this right away. You should be, you should be creating your own economy because let's face it what happens when there's a recession? Because we know based on history, there's recession every 10 or 15 years. So how are you going to prepare for it? The rich and wealthy people, they always get rich and wealthier in recession and usually in any kind of economy above, mainly in recessions is when rent is, you know, on the, on the, on the rise. You want to make sure you have some kind of passive income and cashflow coming in. The end goal, the ultimate end goal is to, to be buying multiunit apartment buildings and renting them out and having like affordable renting. Basically, even if there is a recession, you're not going to have a problem. You're going to continue creating cashflow when everybody else is going through a lot as you're, as some of you may already been through that pipe, but by creating the charge flow, you're creating your own economy and you're not relying on certain things whereas a lot of us out there, if you're not prepared, if you haven't built this around for yourself and your family, then you're really vulnerable. Right? Think about it. What happens if there's a recession and you lose your job or you lose your house or, or something. We don't want to think about these things, but these are things that can easily happen to any of us. And we never know what's going to happen. We want you to be prepared. We want everybody watching this too, to be able to provide that for themselves. Like even if there isn't a recession, even if we don't have a crash, you know, we would like you guys to have just make more money, right? Like we, there is no scarce amount of money to be made. There is enough money for everybody to, to be wealthy. And the way that we did it is through one of the ways that we're doing it is through Airbnb.

And just by creating cashflow and by just thinking differently, by and think about it, you know, if, if you look at the trends right now, a lot of the trends are like, you know, Amazon is basically selling products and they don't, Oh, they don't make any products. Netflix basically took over a blockbuster, you know, they disrupted that industry. $6 billion industry. Uber doesn't own cars and it's just data on traffic. Airbnb disrupting the date. They own more listings than the four top hotels combined. So how is that possible? Where they've done that in 10 years; they've reached $32 billion net worth. Whereas Hilton is been doing this for a hundred years and we're only at $22 billion. And this is not to really insult the hotel industry, but the reality is that they haven't been able to keep up because if a family wants to travel and they want to stay at a hotel, it's very, very expensive for them. Especially in expensive cities. Like Toronto is one of them. Vancouver is one of them. New York city's one of them.

Airbnb has made that option available for anybody to be able to travel. And another way you can leverage Airbnb's, even for those who are looking to buy a house and one rent out the basement. And traditionally you might get $1,000 from the basement a month. But with Airbnb you can easily make that thousand into 2000 so imagine you get $2,000 from a basement and your mortgage is going to be a lot less, or maybe even nothing, right? It may be less than what you're renting right now, cause a lot of people are afraid of a mortgage and you don't have to be. Because if you Airbnb a portion of your house, either all of your mortgage can be paid off or at least a good chunk of it. Get rid of your fear and build your own economy.