Short-term rental is so much hassle and not worth the profits. That's what I used to think for years until we had a pain and that pain was negative cashflow and when the market turned, the price of our house declined much lower than when we bought it so we couldn't sell and had no choice but to figure out a solution. And that’s when we had to turn to Airbnb and only then did we realize what kind of opportunity we had found... 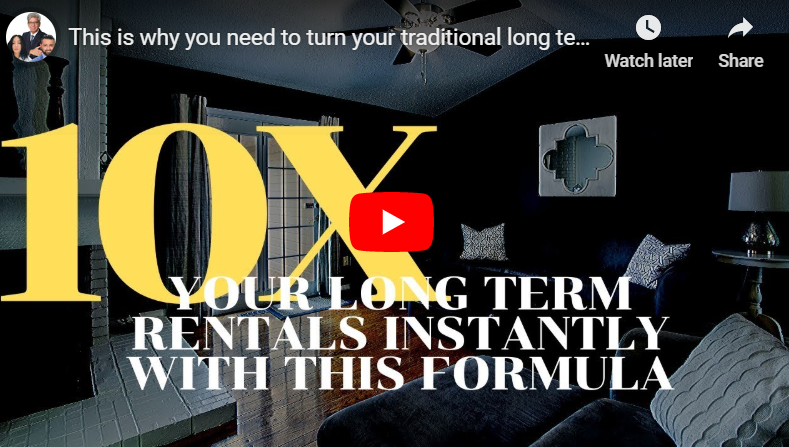 Why you need to turn your traditional long-term rentals income properties into short term Airbnb? If you haven't heard or some of you may already know, some of you may have experiences as a guest, but if you haven't noticed, Airbnb is one of those disrupters that's just, you know, changing the way things are being done in this world. And you, what we found we came through an opera, we came, we came across this because we had, we had a problem, we had an issue. We had a property that the mortgage was much higher than what we could have rented out if you were to rent it out. We would have had negative cashflow and, and force. And at the time we couldn't sell this property.

We had this pain and we were trying to figure out what to do and we were thinking of chopping up the U and T multi-units ourselves and renting it out to like six or eight different people because it was a bigger house. So, then I met one of my friends there right when I was about thinking about what to do with this and she told me about Airbnb and, and I was always skeptical and how it's going to be hassle headache and it's going to be, people are going to damage my house better at this. But this time this was like, I heard it already four or five, six times from different people and it always just brushed it off. But this time because I needed this, it kind of solved, I listened to her a little bit more and she showed me the app on her phone and guess what?

She showed me basically a month and a half, two months in advance poked, and I'm talking about if you're feel ready to get yours, traditionally for $100 a month, you have a house, you're renting it for $3,000 that's basically you're, you're charging $100 a month. Now in Airbnb, you can take that house and start $200 a month. Basically, your two to in your money, that's just the start. Once you get a, become a super host and have good review and give good, give, give guests a good experience, then what's going to happen is that $200 is going to turn into two 50 at night and that $300 night. So alternately, when you were collecting $100 a night, traditionally, now you can turn that into $200, $300 a night and have at least 20 to 25 nights a week, a month booked if you do it the right way.

We've unlocked the formula and we're going to be sharing that with you guys, how to turn your traditional long-term rentals where a lot of the tenants are kind of entitled to, to, you know, living there. And you can just turn to short term rentals and all from your phone and some other partners that we're going to talk more about like the cleaners and hosting companies, how you can turn your, turn this into a positive cashflow there. There's always a solution. There's always an opportunity where there's problems.