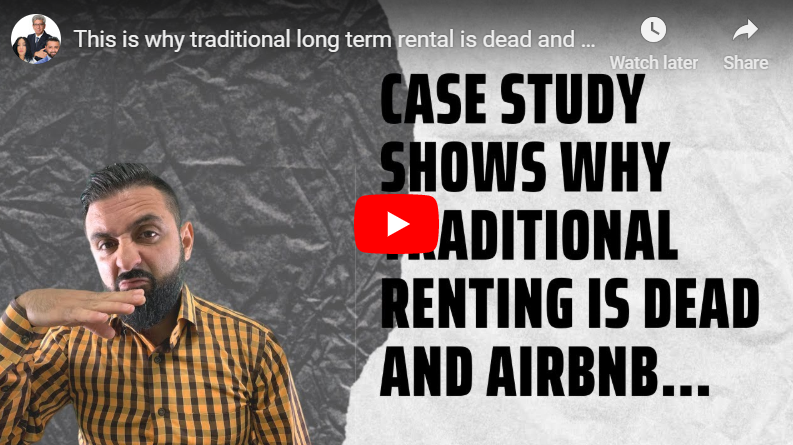 If you rented it out to someone for one-year lease and you just basically $100 now, so you're getting $100 a night and that's how you would get traditionally. Now what would be the case study that one of the recent properties that we were able to run $3,000 if you put it on the long-term rental, what was the results we got for the first three months? We were actually on average getting $200 a night. This was, we're, we're getting about $6,000. Yeah. The way the first month, what's going to happen, like for this $3,000 the first month we were trying to just fill it up and get the reviews and build our credibility and become a super host. That’s the trick. That's the secret. The first month we may make a little bit less. Even with that being said, when I see make a little bit less, instead of making $3,000 the first month we made $2,000 so basically we were able to rent this, maybe not the whole 30 night, but I might buy 25 nights if you had it book and for about average around $275 a night.

If you were able to generate around $5,000 the first month, now the second month, but this property actually has the capabilities of making more like you can actually make six, $7,000 you know, above $4,000 profit on this property. Eventually. Yeah. So that's the thing, everybody else on a, in the beginning, you're growing it, right? So, but while you're growing it, you're still more cash. You still have a more positive cash flow than if you did a tradition. Yeah. Now the second month, what, what happened was it went from $5,000 to $5,500 and then the third month to $6,000.

Now after that, you're basically going to stay around $6,000. If you do like smart poking and you constantly monitor your calendar and adjust the prices for special dates and stuff like that, then yeah, you're going to get, you're going to get filled up. The trick is getting the calendar full. Right? Think about it now you're able to, instead of getting, getting $100 a night, traditionally now you're able to get on average minimum 200 to $250 a night and it doesn't take that much effort. It's actually a very easy, easy business to run because Airbnb does all the marketing for you. And the other few steps that you did to leverage is very easy. Yeah. There are companies out there that are looking to solve that problem for you.